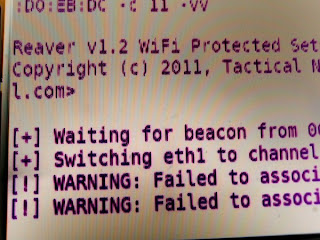 Hello internet,
I've been hearing all about this tool "Reaver":

*NOTE* -- It seems like it may also depend on sql-lite ... or something, this is from the comments:

5)now type `reaver` at the command line to see usage :)

You'll also probably want the aircrack-ng suite if you haven't done any wifi cracking/recon/diddling before...

~NOW~
I'm going to just type out what I'm doing as I go along to actually use reaver.

Now... I'm not sure if it's doing it's magick, I'll check wireshark soon, and maybe read the paper about the vulnerability, but I'm in skirpt kiddy mode at the moment.